Suffragettes – Magna Carta – Windrush. Revolution and Time: This was the perfect day for me to wear my self-made (a first!) Votes for Women T-Shirt, which I made on the occasion of the centenary of the passing of the Votes for Women Act on 6th February. I didn’t wear it ,but it was a good day. The day I mean was ‘Processions’, organised by the art organization Artichoke, to celebrate 100 years of Women Voting in Britain! 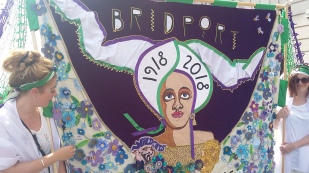 100 years – not for every woman, as it’s had no effect if you didn’t have property – so voting was tied to how ‘well’ you do in the capitalist system! – but still I honour this achievement, as it was not easy to get this far! If it hadn’t been for Emily Davidson throwing herself in front of a horse, how much longer would it have taken? So when I saw the horse manure in the middle of the road, not too far from the Houses of Parliament, I was absolutely touched!

1918 – 2018, so these are the years! Powerful years, 1918 at any rate: war had ended, women got the vote! Absolutely magic! And, right in the middle of this centenary, directly half-way through, was 1968! Wow, so there’s a kind of revolutionary rhythm going on. What a sweet half-time that was! Then I find women on the march who are celebrating women in the NHS, and that started in 1948. One magic 8 after another, it seems. And that wasn’t even the only revolutionary event of 1948, there was the Windrush as well! The ship that put African-Caribbeans on the map. It wasn’t the beginning of African-Caribbean presence in Britain, but it was an amplification! Through the years, the 8th wonder continues: 1958 the first CND march to Aldermaston took place. And then there was 1928, when women’s suffrage was extended to all women in Britain. And then, long before this, there was 1848, the year of social revolts across many countries!

On the march, we borrow from each other’s liberation struggles too. They plaid reggae and it was great, for these are the sounds of liberation par excellence. But then they played less fitting tunes I thought, going hip hop, a bit pop. I would have loved to have heard more Greenham Common song.

There were hundreds of banners, very good ones, and they reflected some more snapshots of feminism. I saw ‘Your silence will not protect you’, a favourite of mine by

Audre Lorde. How I wish it were true! I think that before that standard will apply, we might have to make it into: ‘Your silence should not protect you’, or it must not protect you. But we are not there yet, it still does. It may be challenging enough even to think that speaking out is not just an act of courage, (though it certainly also is!), but also an act of responsibility!

As the march made its way through Piccadilly, the Royal Academy had banners out, to commemorate 250 years of painting! So we had 100 years of Votes for Women, they had 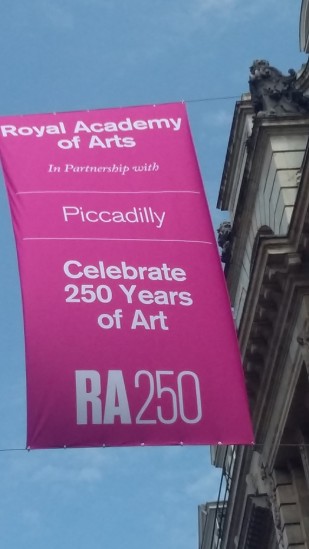 250 years of painting! Now we know which came first, the chicken or the egg! I say ‘us and them’ but who are ‘they’? We know who ‘we’ are:  us previously disenfranchised cannot rarely be mistaken, or diluted.  But ‘they’: painters, artists, including ‘us’. But then did it? Did they include ‘us’? Perhaps yes, perhaps a woman could paint before she could vote. So much for our rights then! I want to paint, vote and more.

So this is about the Magna Carta, but I am putting my own spin on it, so I’ll give it an

independent name and call it magnu cartu – and to include those in its making that have not been acknowledged. I am here to visit an art installation called The Jurors, which is 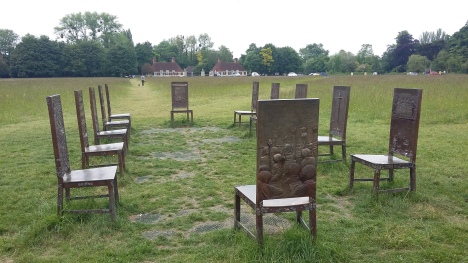 doing this too, brilliantly: acknowledging the activists for justice, and so it revealing many bits of history we don’t know, we have forgotton, or we don’t remember, or we are not aware of – or some of us are. The Jurors puts together the rebellions and quests for justice across the centuries of the magna carta, the grand card of rights. The Jurors are those who have judged injustice to be unfair: judgement leading to activism. The Jurors, here, are not the judges, and the powerful of the system, but those who are leading rebellions, the people, the dispossessed! Power, and judgement, to the people! There have been struggles for justice at every time in history, but only some have been recorded, and most of them once again forgotten by too many of us, if it wasn’t for public sculptures like this one. The sculptor of The Jurors is Hew Locke, British-Guyanese artist from Brixton. Locke has done lots of great and deep art works, such as For Those in Peril, and other victims and activists, enslaved or otherwise forgotten, in need of declaration.

Getting to The Jurors is not easy. On the way I saw there were several sculptures and murals about it, all around Runnymede, where it all happened, the big charter, the magna documenta! I want to go back and look at the other artworks as well, but The  Jurors was the longest to walk to, so for that reason alone, I wanted to make this my priority. As always, relying on railways for travel is interesting, for what you find out along the way, or before you have even started travelling. First of all, despite Runnymede’s significance, I find that there is no railway station called Runnymede. I then found Sunnymeads and Wraysbury on the map, two stops on the other side of the river Thames, but it doesn’t help getting off there because there is no bridge across the river! Very peculiar I thought, because the whole area is so exquisite, so why is there no bridge across the river? But maybe that’s why, maybe a bridge would make one’s access too easy? Magna secret! Don’t spread the word of justice, don’t mention the charter! The secret is as big as the charter itself! What a magnificent mystery. 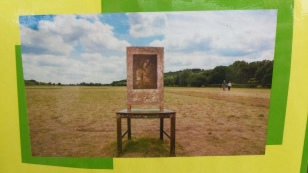 Magna magic land. Big land, magnus, grande, great, massive.  I take the road to this land, I take the road as a pedestrian, walking on the side. It’s a big road, many cars, no pedestrians, so I am alone, walking. From here, the road is bigger, and louder, than the land. I walk by the edge of the road, along the edge of The Land, with cars as loud and threatening as thunder and lightning! The land: it’s old and magna: magnificent. The road: it has more voice than history, more volume at laest. It’s a bit tedious and dangerous, it’s as if history has been taken over by the road.  At least the road has surrounded history, side-lined it, overtaken it like a car with an arrogant driver inside it. No respect for history, this is the road! As if it’s more important. If the car is on the road, I am on history.

A road instead of history! History is a road, of course, but not that kind of road that’s filled only with cars and lorries, and the noise they produce. Apart from the road, Magna Carta land is surrounded by the houses of well-to-folk. Nobody, who I asked, knew The Jurors, to start with, and when I did see them, I recognized them by a group of people who were moving around the chairs, which make up The Jurors. So now everyone can play juror! That’s just amazing! Now is playing juror enough to generate consciousness?

I am still by the river, on the other side of the road. The chairs formed a circle. Getting there, approaching the chairs, was like finding your path to some ancient stone circle –

the type I last saw with the Ring of Brodgar in Orkney!  And that was a great appearance, and a great entry I thought!

When getting there, I found it was a school class, and the teacher told me, how much schools have been involved in getting to know the great work. What better thing to do then to show children works about getting justice!  Each chair is intricate, and tells more than just a single story, in itself. And all the chairs together is a great conversation! Struggles for justice across the centuries, making stories which sit side by side here, with 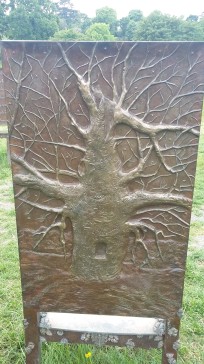 a common denominator: making this world a better place. Where would we be without or advocates for freedom and equality. Let these stories not just be told, but also be seen. So go into the field, go to magna carta land, go right through to the end, along the river, and then see the inscriptions of the stories of revolution, time after time, for our benefit.

I cannot seem to finish this, there is never enough time to list all the revolutionary moments we have had, or there have been – because ‘we’ never had all of them. Here I have passed by London Bridge, and remember I had mentioned 1948: so here it is, a new artwork on the wall, about one of the big events of that year: the Windrush. Now 70. The artwork is by Deanio X. “Empire Windrush”, they call it, and I say: let the empire go, but let the people stay! 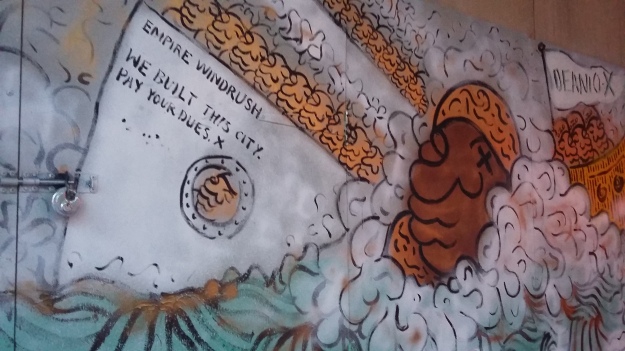